A Girl Should Be Two Things: Classy & Fabulous. - Coco Chanel 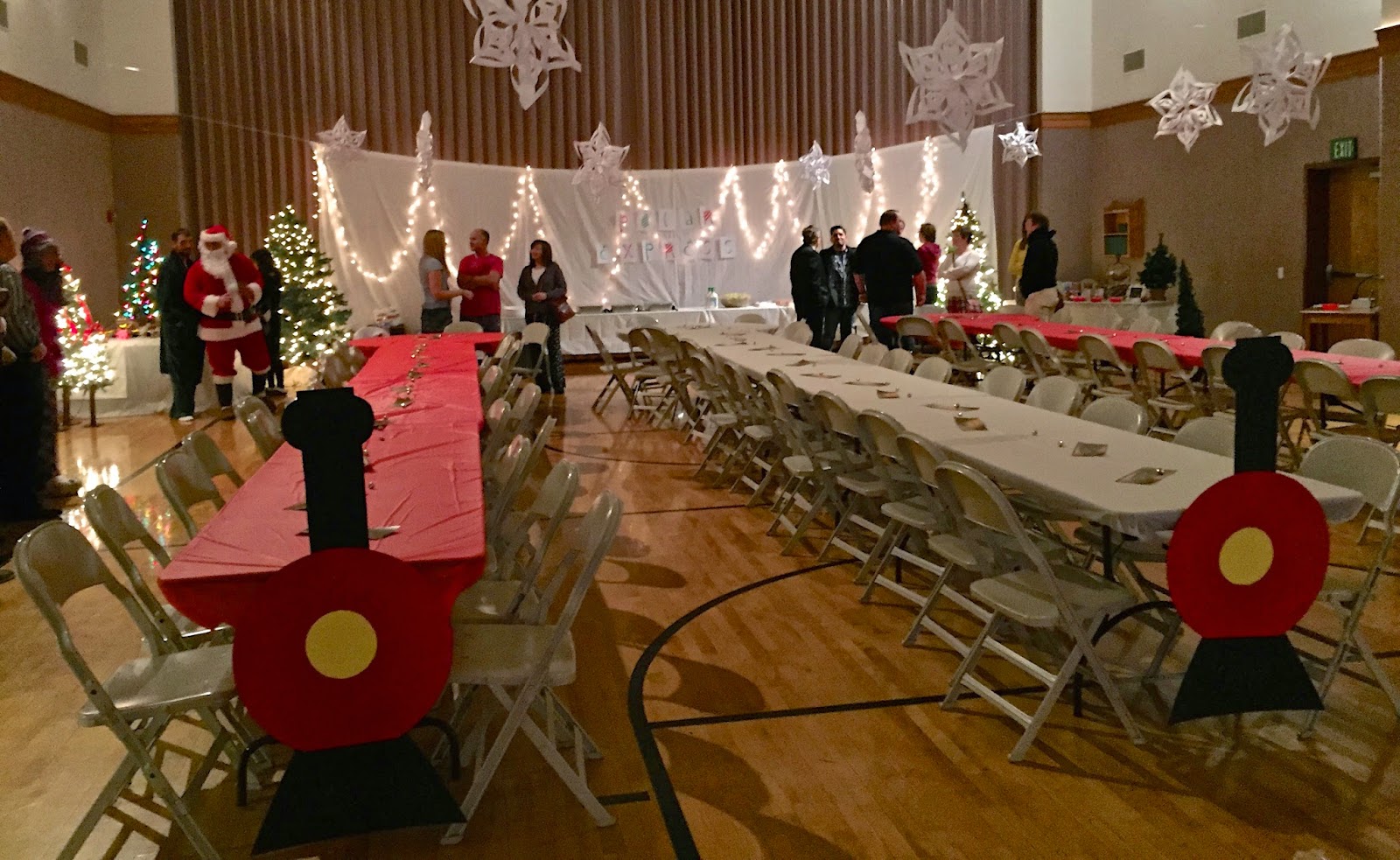 Yesterday was a big day for me as activities co-chair. It was the day of our ward Christmas Party. I had a vision for this party... it was a big vision for a singles ward activities committee... but everyone really pulled through and I have to say I think it turned out perfectly. It was A LOT of work and the last couple hours got a little stressful trying to get it all done in time for when the party started... but it all worked out and the hard work paid off. I have to say.. I don't hate being in charge and the entire process is even fun for me. Pinterest of course helps a lot with ideas and DIY projects, but yeah. I think maybe in another life I was a party planner. Let me tell you what we did.

As you can see from the first picture, I collected some Christmas trees and had one girl on my committee make those amazing snowflakes that hung from the ceiling. I loved them and I thought they added such a cool affect. Each table was a train. My co-chair, Ian and Mike on our committee cut those out the night before. I was proud of them. 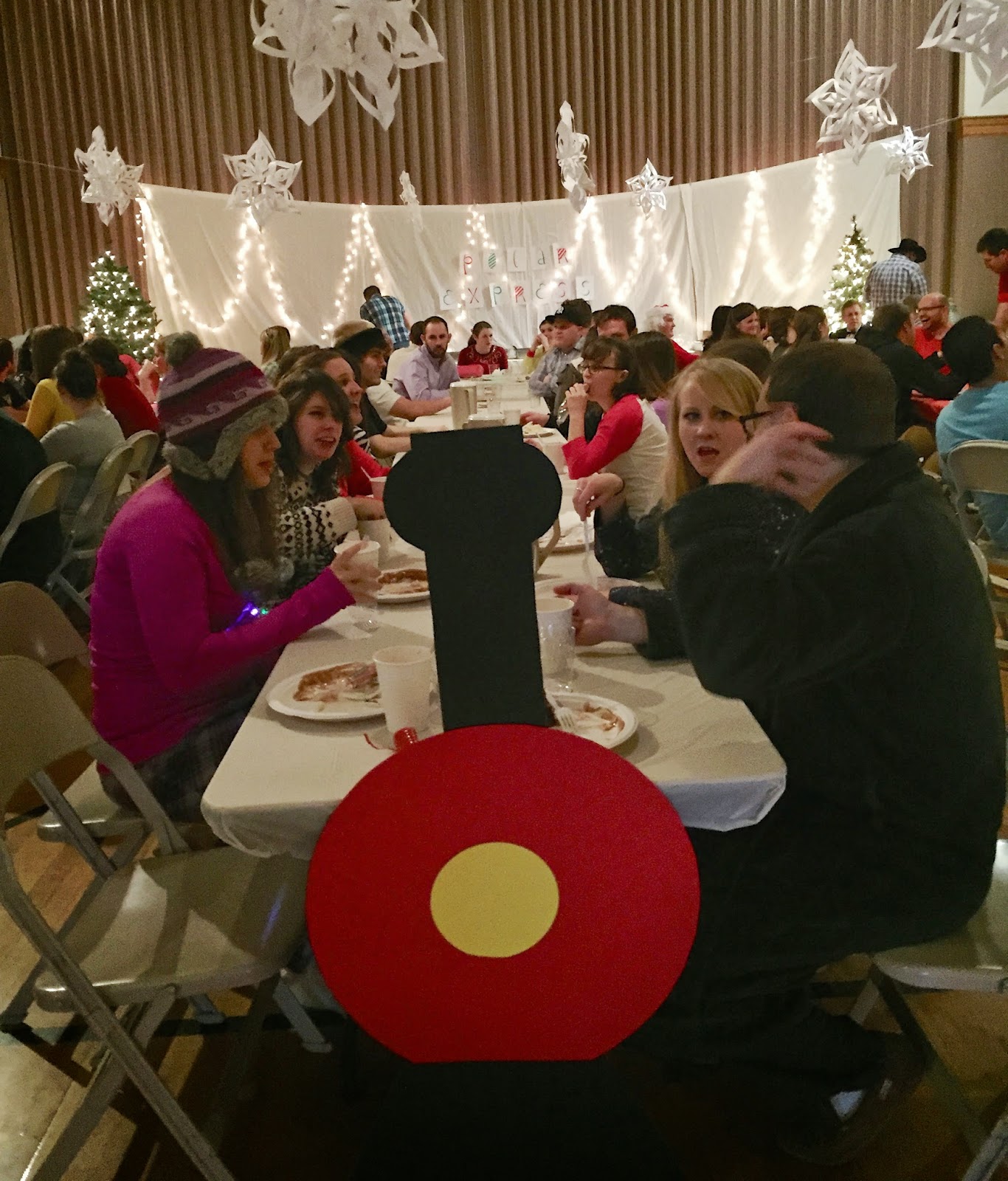 On each train table, I had train tickets and bells spread out as the center piece. I thought it added a cute little touch of detail. I'm all about the details. That is the fun of having a theme! 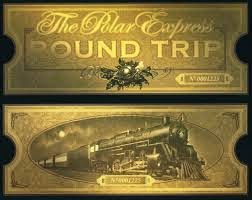 The food table is in the back. The food was catered by Marvelous Catering (aka Molly's restaurant). The food was awesome. We bought salad and dessert to have a little extra food. 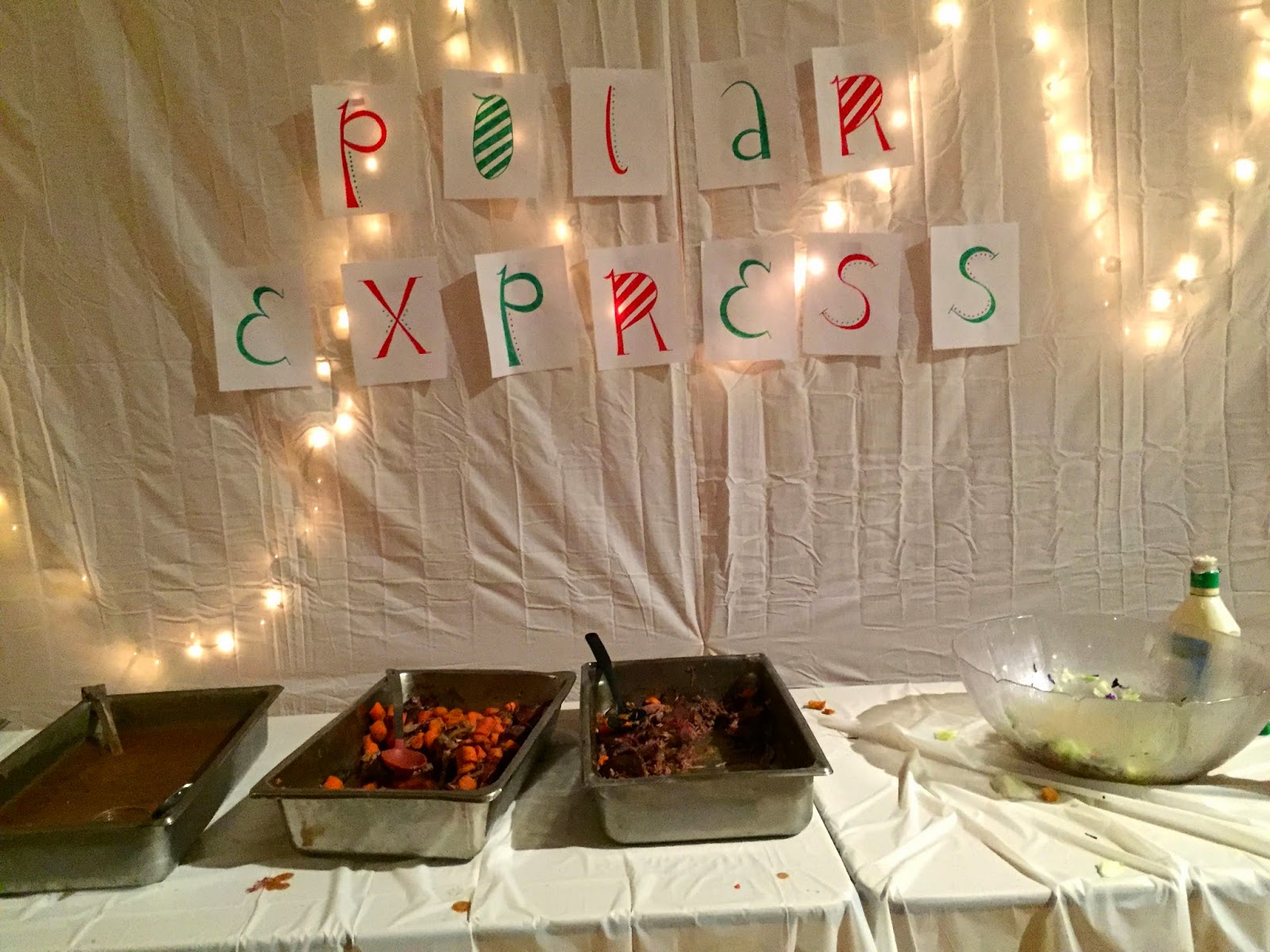 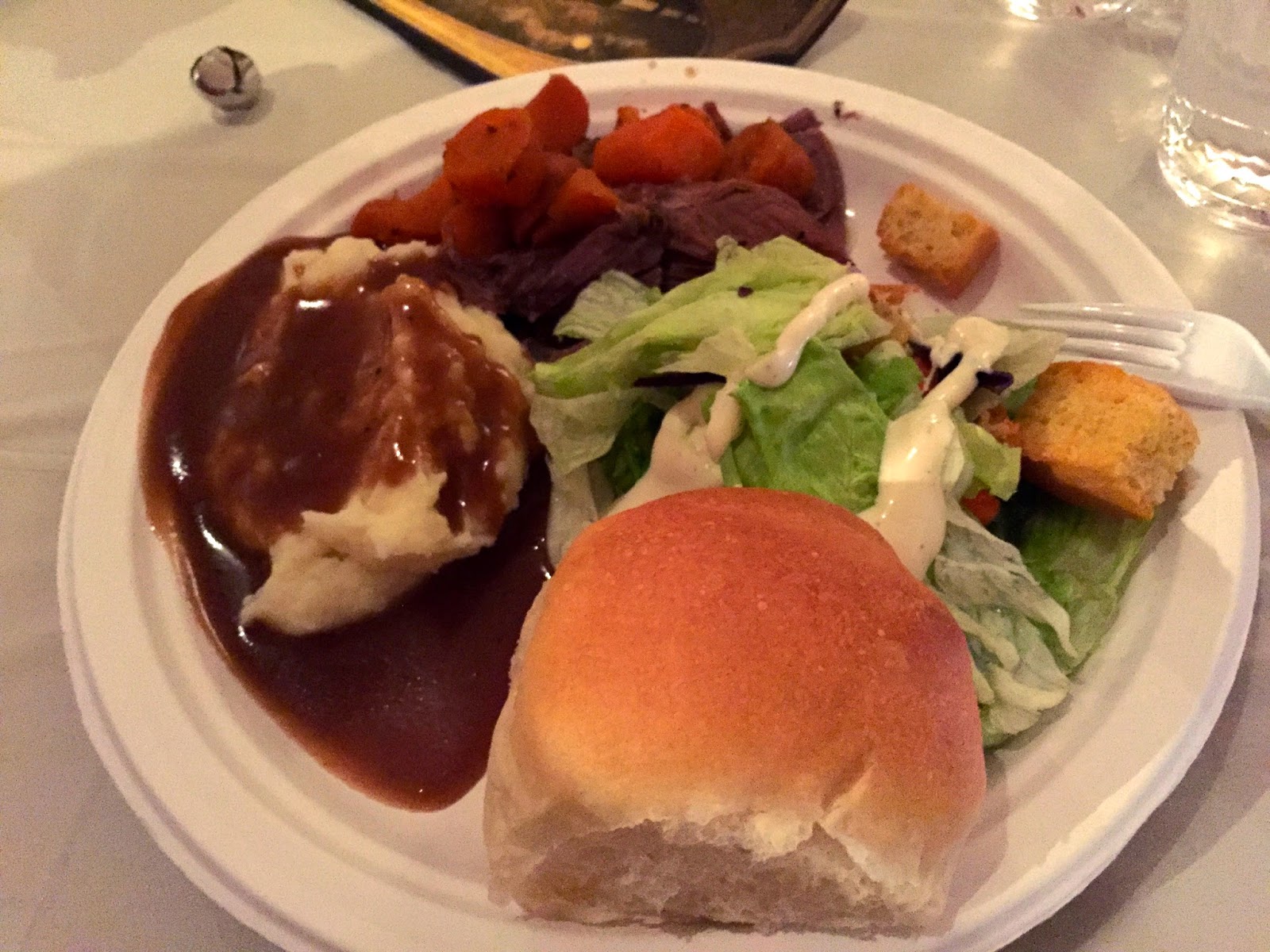 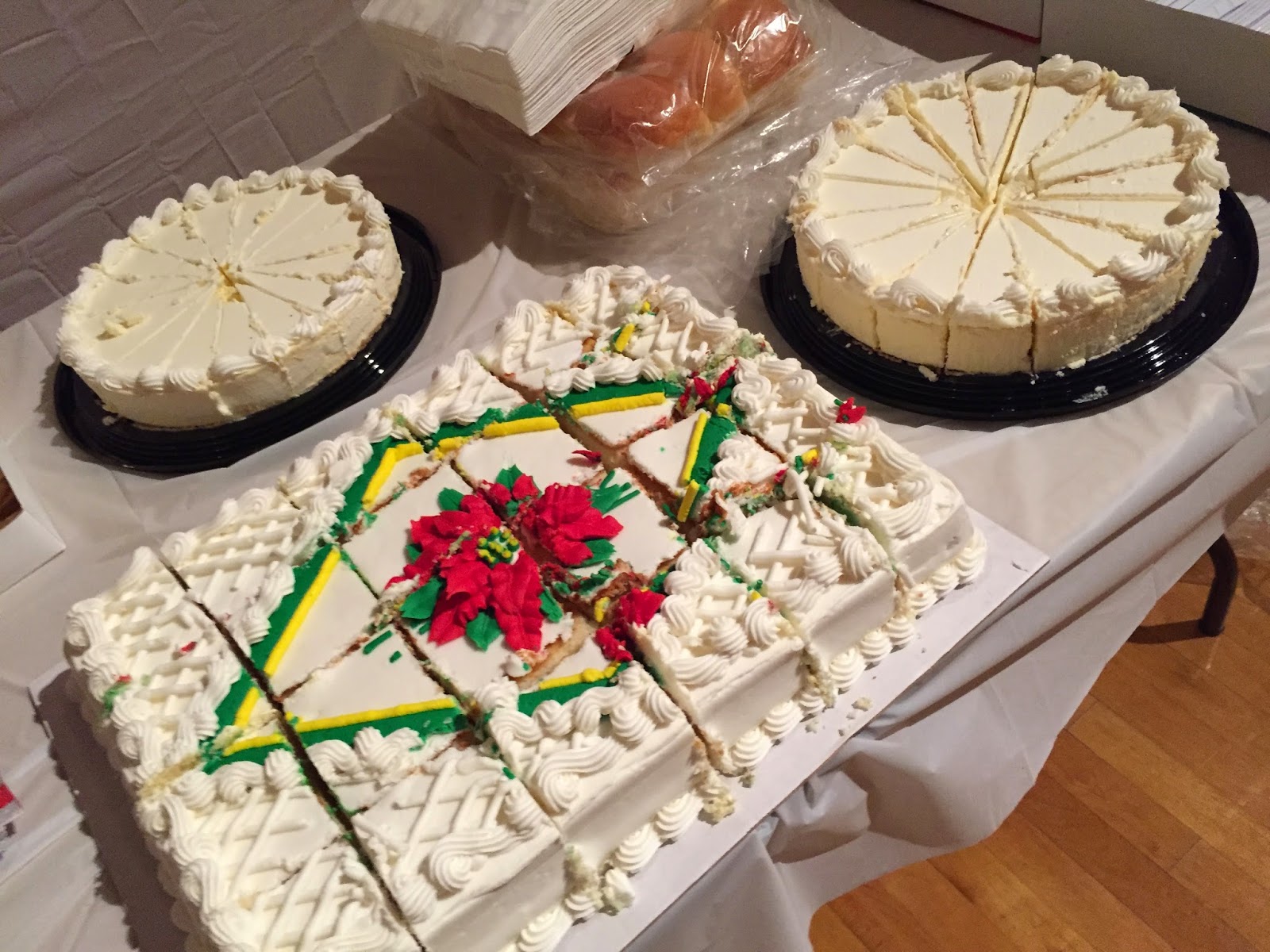 Along with the main food, since our theme was Polar Express, I thought it was would be fun to have a Hot Chocolate Bar. I think people really enjoyed that. There was a choice of two different hot chocolate powders, then you could add cookies to dip, marshmallows, caramels or candy canes. 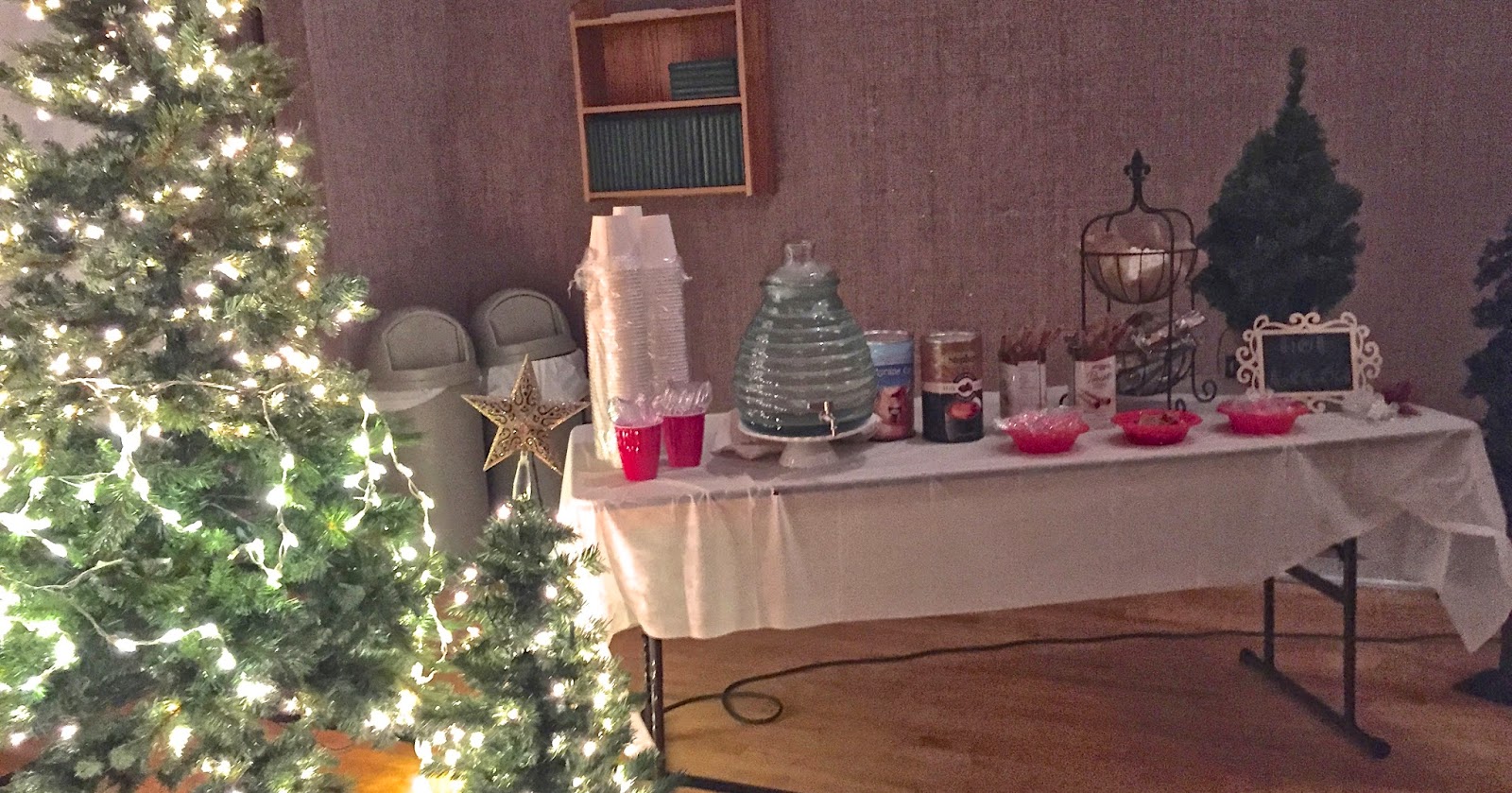 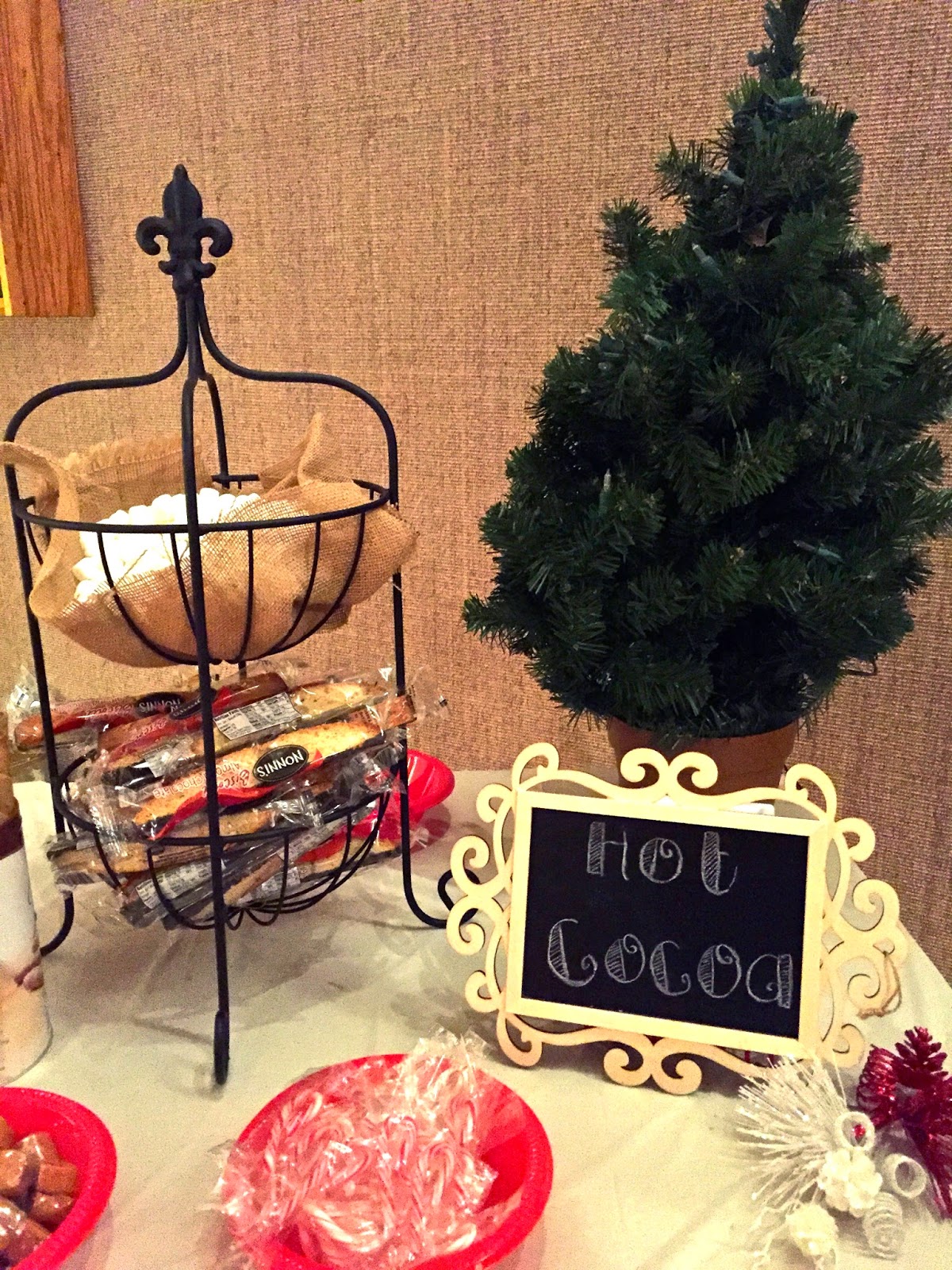 On the other side of the food table, we had a Christmas model train set up and running. It was so awesome. Brother Earnshaw's dad has quite the collection of model trains and let us borrow his Christmas one. That train alone was $3,000! That doesn't include the town or any of the cute set up that goes along with it. It was a very cute touch. 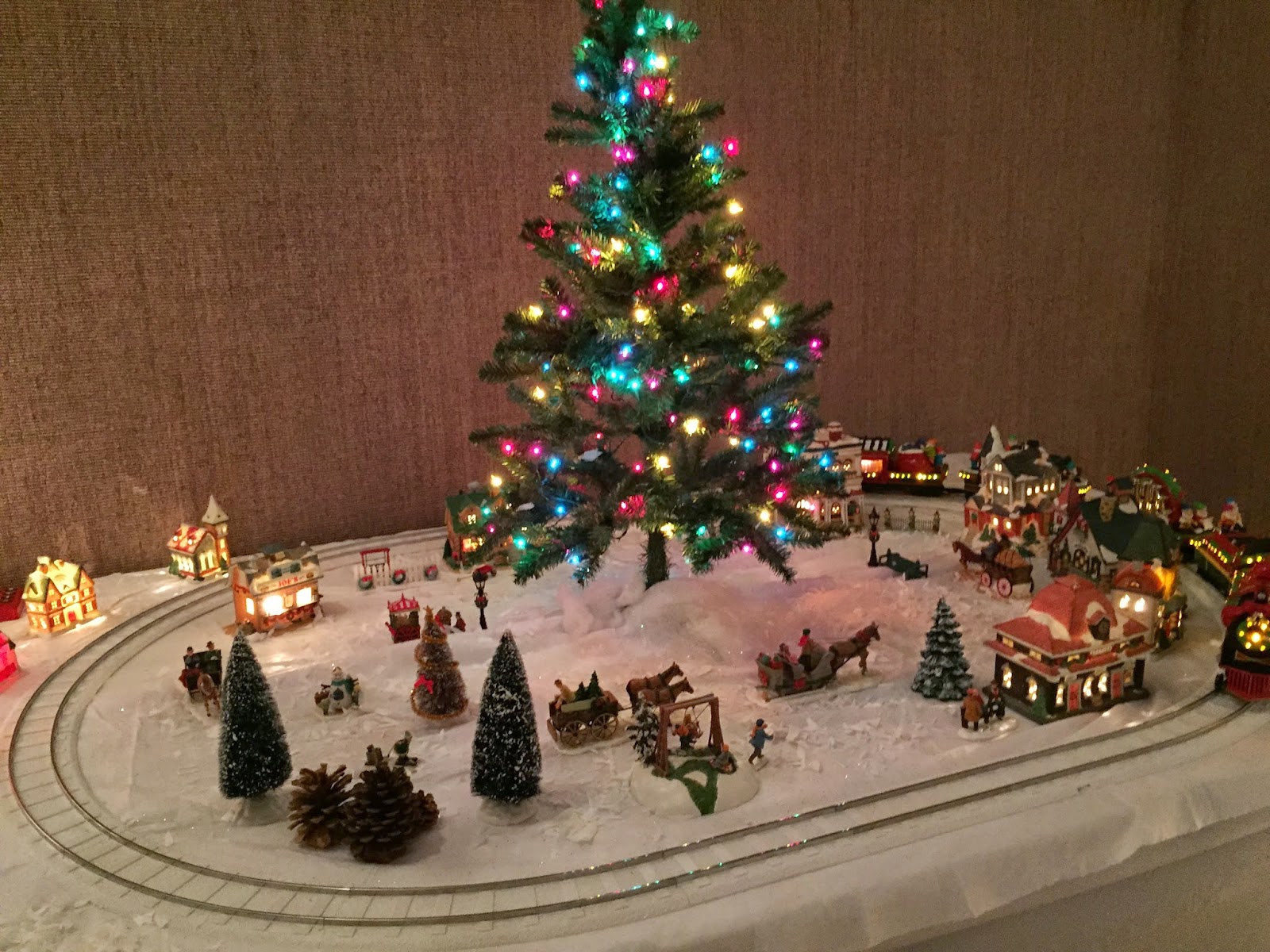 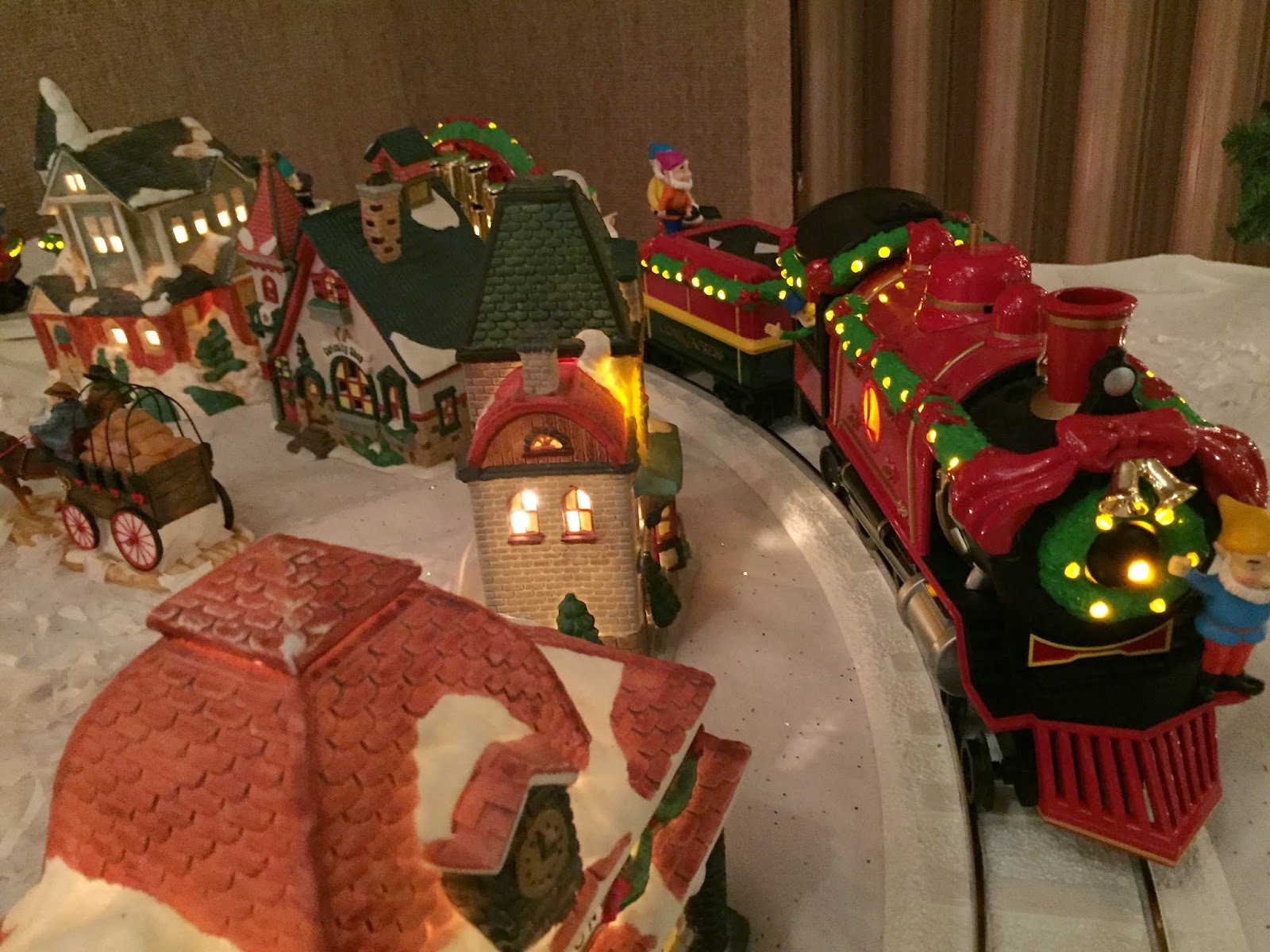 On the other side of the room, we set up half the room for picture spot to take pictures with Santa at the North Pole and the other half of the room was for the stage area where the piano was and the small program would take place. In the middle and really the center piece of all the decorations was Allison's pride and joy that I stayed up until 2am the night before helping her with... the fireplace. Ian borrowed his brother's 60 inch tv to play the crackling fire and Allison and I built the fireplace around that. It took a lot of boxes and paper and a lot of painting of bricks. We LOVE how it turned out though and added such a great touch and homy feel. We also made the North Pole sign which I thought turned out adorable and we brought in my rug and lamp and Allison's night stand and borrowed my BFF neighbor's rocking chair. The program was short and sweet. Just how it should be. We had Lindsay and Jared sing Baby it's cold outside for a little humor and then a small group that sang "Believe" from the Polar Express movie. After that the Bishop (who I got to dress like the conductor) read the Polar Express and while he did he had everyone gather around like children. After the story he tied it in with a spiritual thought. I took this picture.... and I thought to myself how perfect it all was and it made me happy. I could tell that everyone was really enjoying themselves. 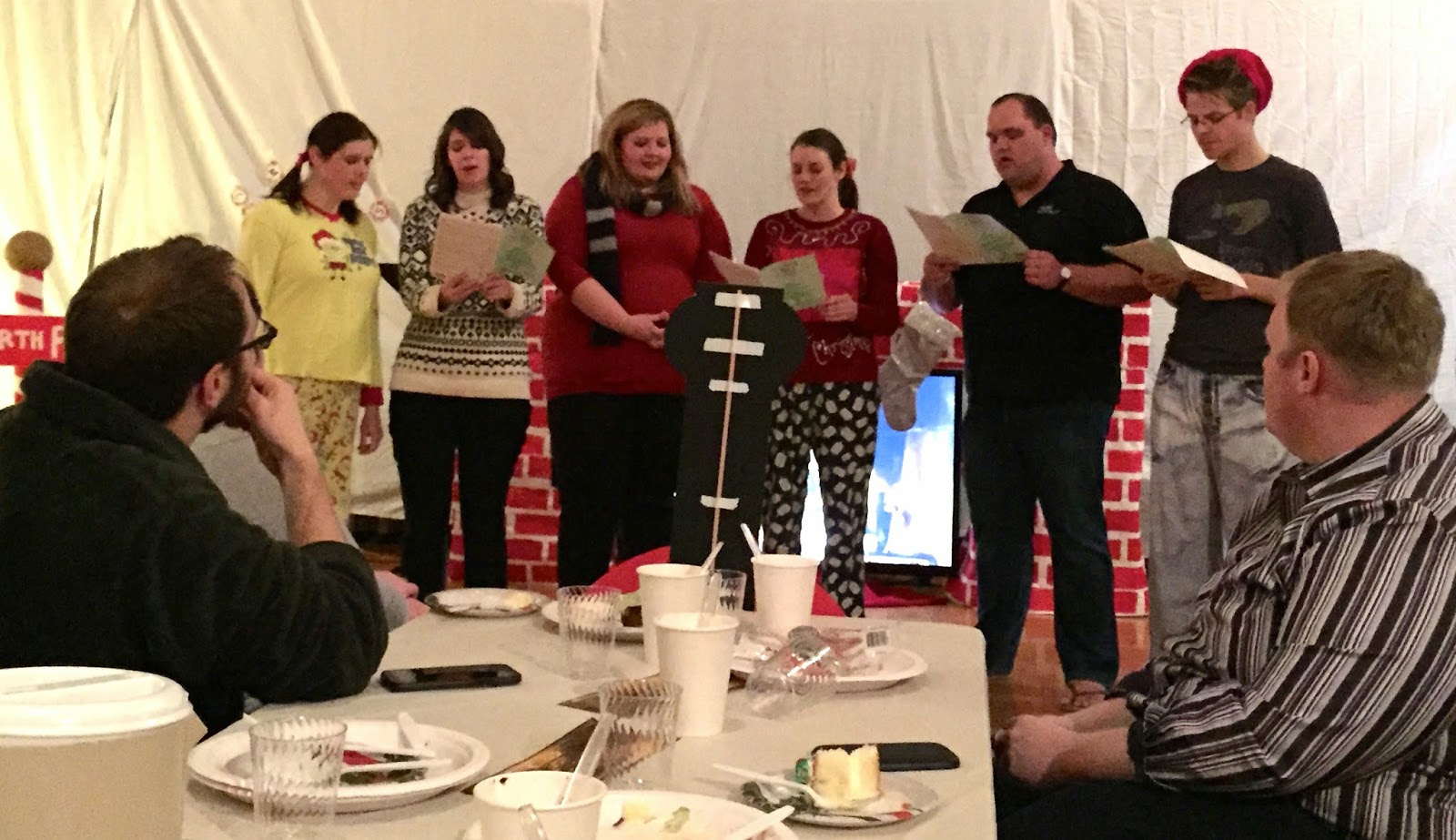 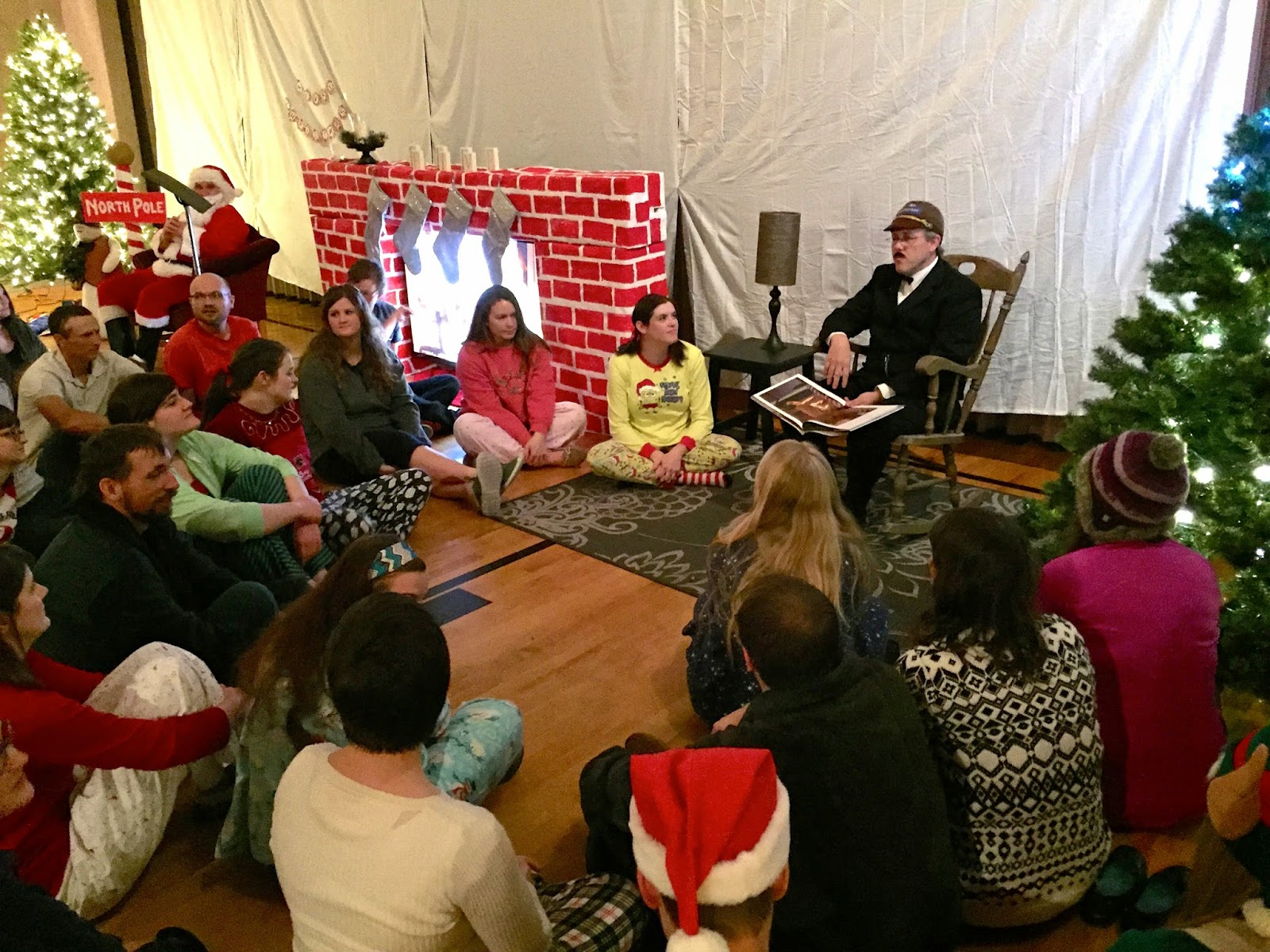 After the program people took pictures with Santa. Brother Hinkley was so great to dress up like Santa. He made a great Santa too. I had my good friend RJ take the pictures... so when I get those pictures from him I will add to these pictures, but I don't know when that is going to be and I didn't want to wait to post about this party... so for now you just have pictures from my phone. Oh! We also had people come in their PJ's. Who doesn't want a good excuse to go to a party in their PJ's? We even had people vote on who had the best PJ's and gave a prize to the person with the most votes. I loved that people came in onesie PJ's. 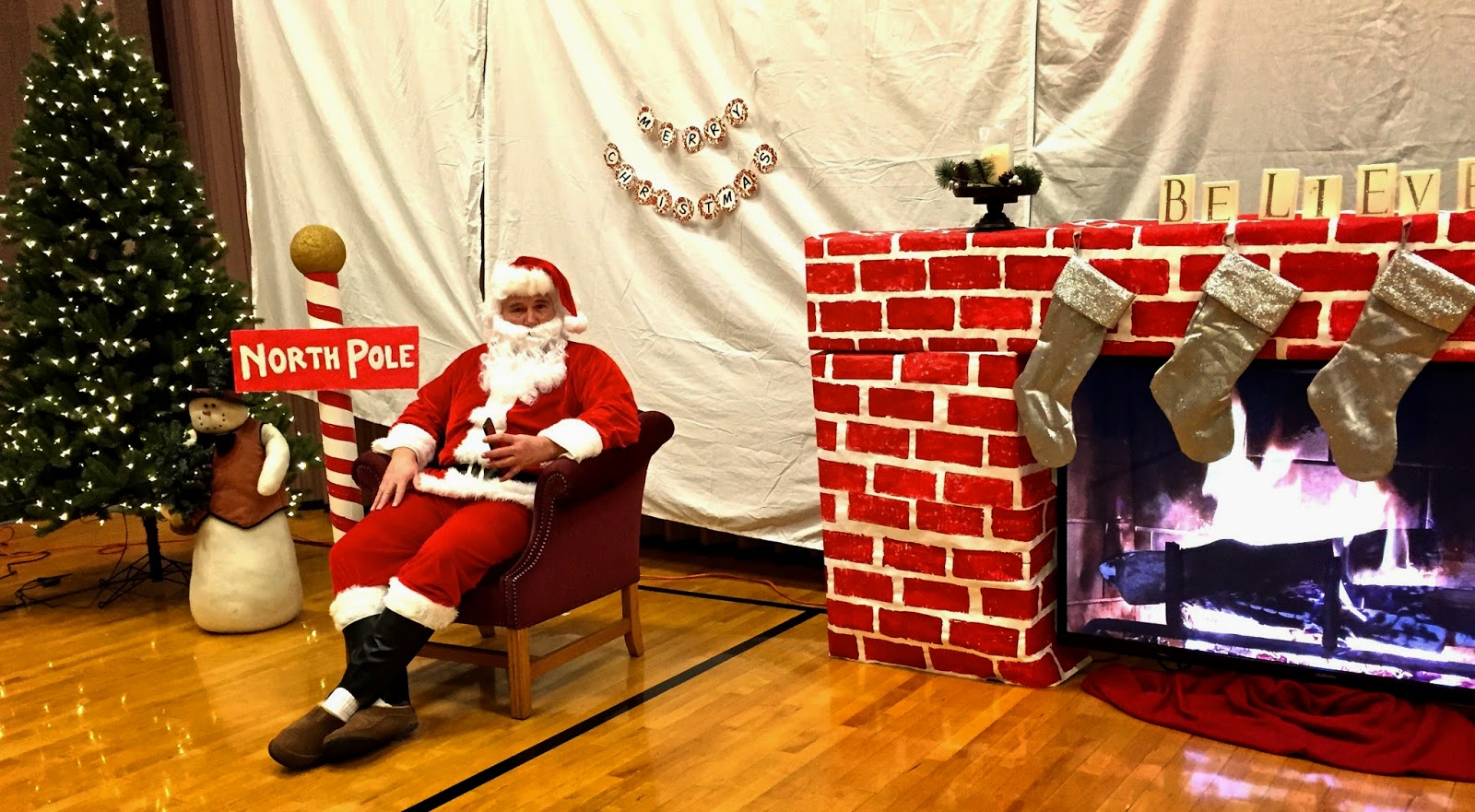 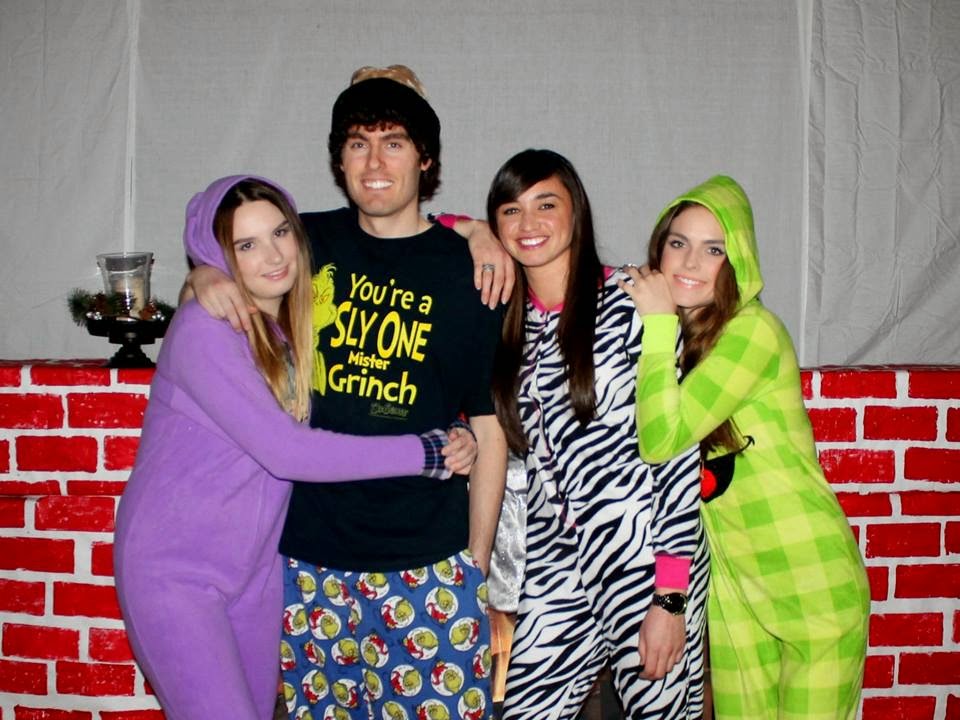 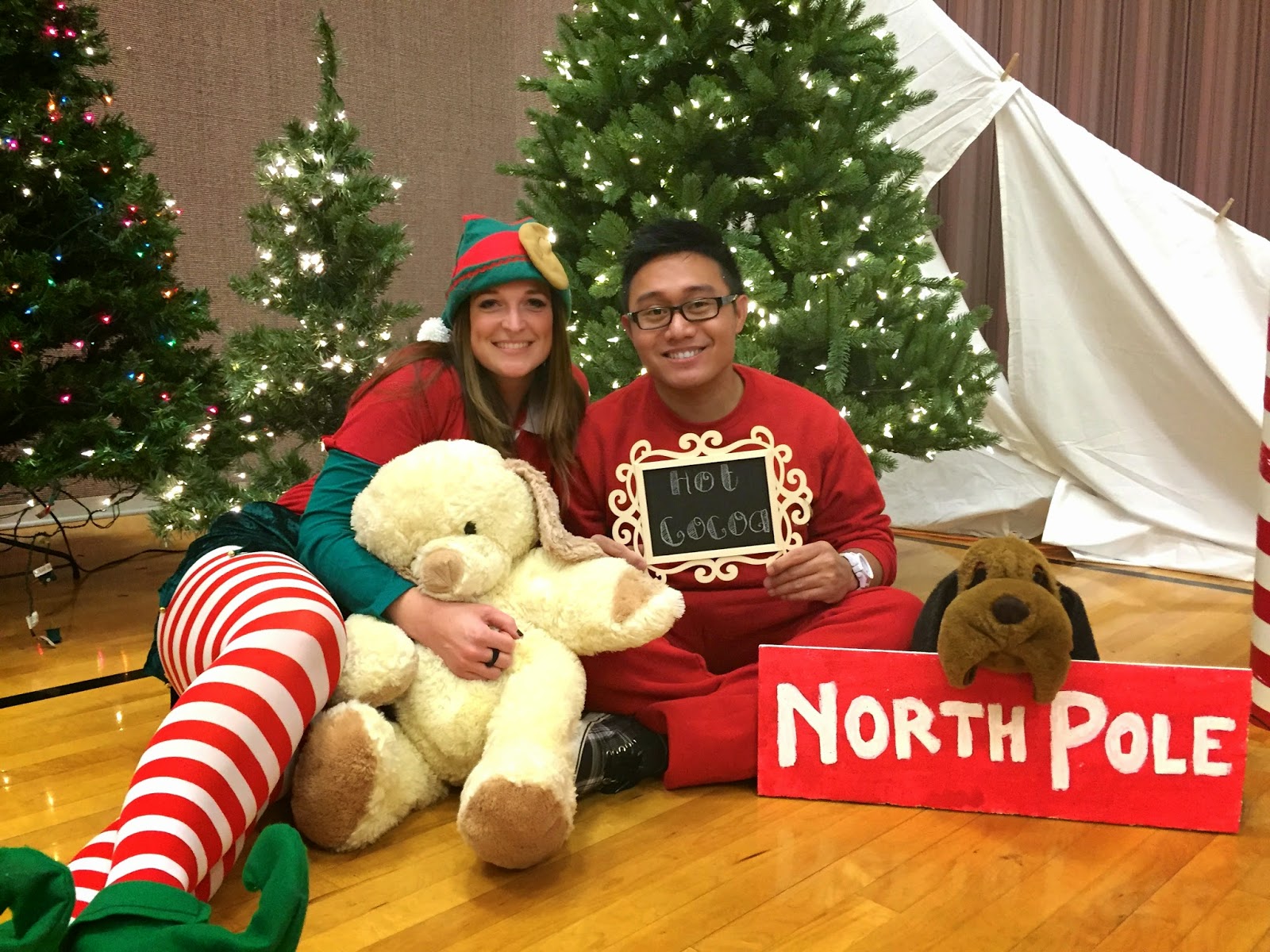 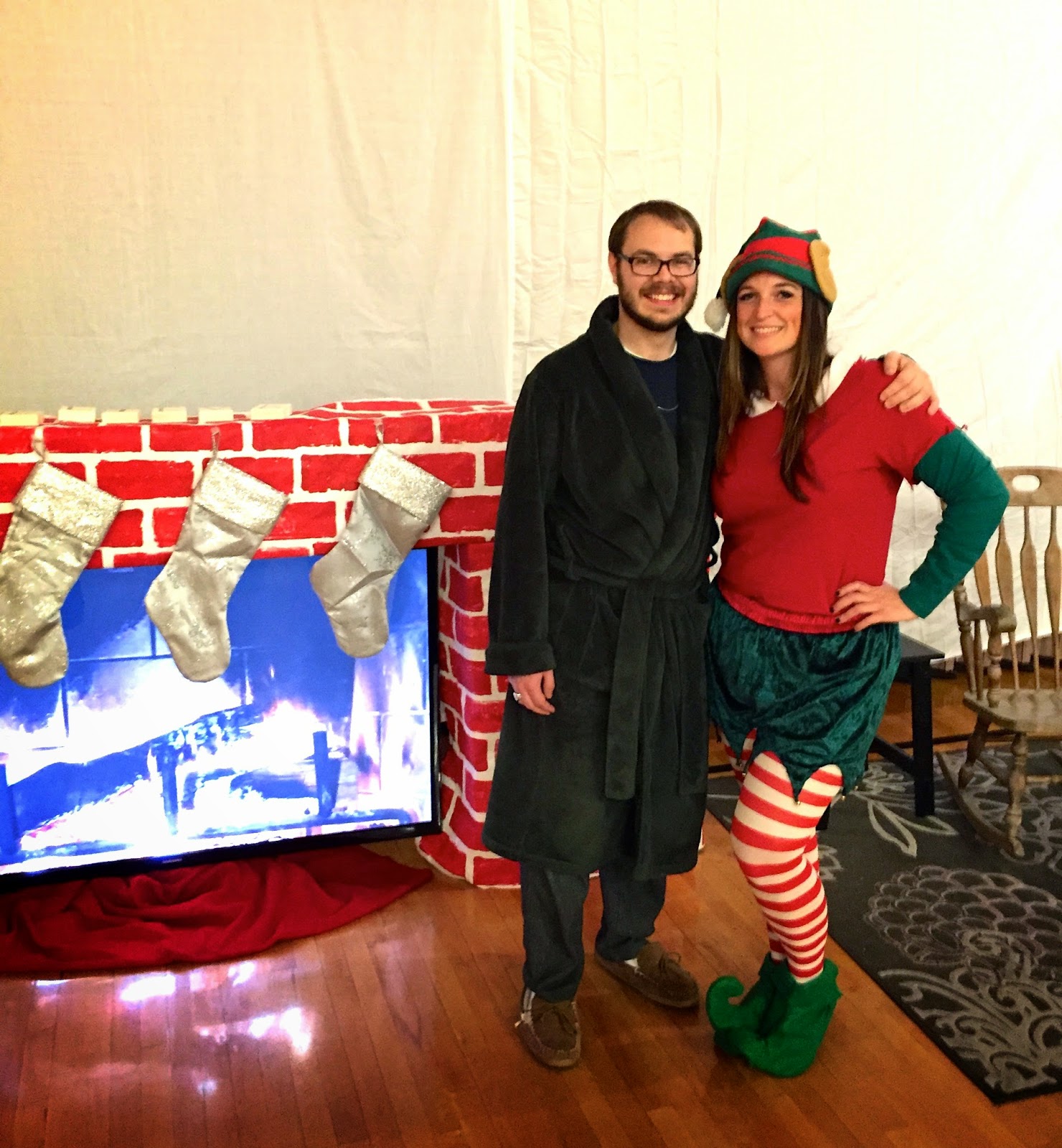 I would have gone all out with cool PJ's if Allison and I hadn't decided to dress like elves. The entire activities committee was actually supposed to dress like elves, you know... Santa's helpers at the North Pole.... but everyone else chickened out and it was just Allison and I that did it. No regrets though. We loved our elf costumes and we felt like even just having two of us... it added to the experience as a whole. Penny was great and helped out by making our awesome elf shoes! 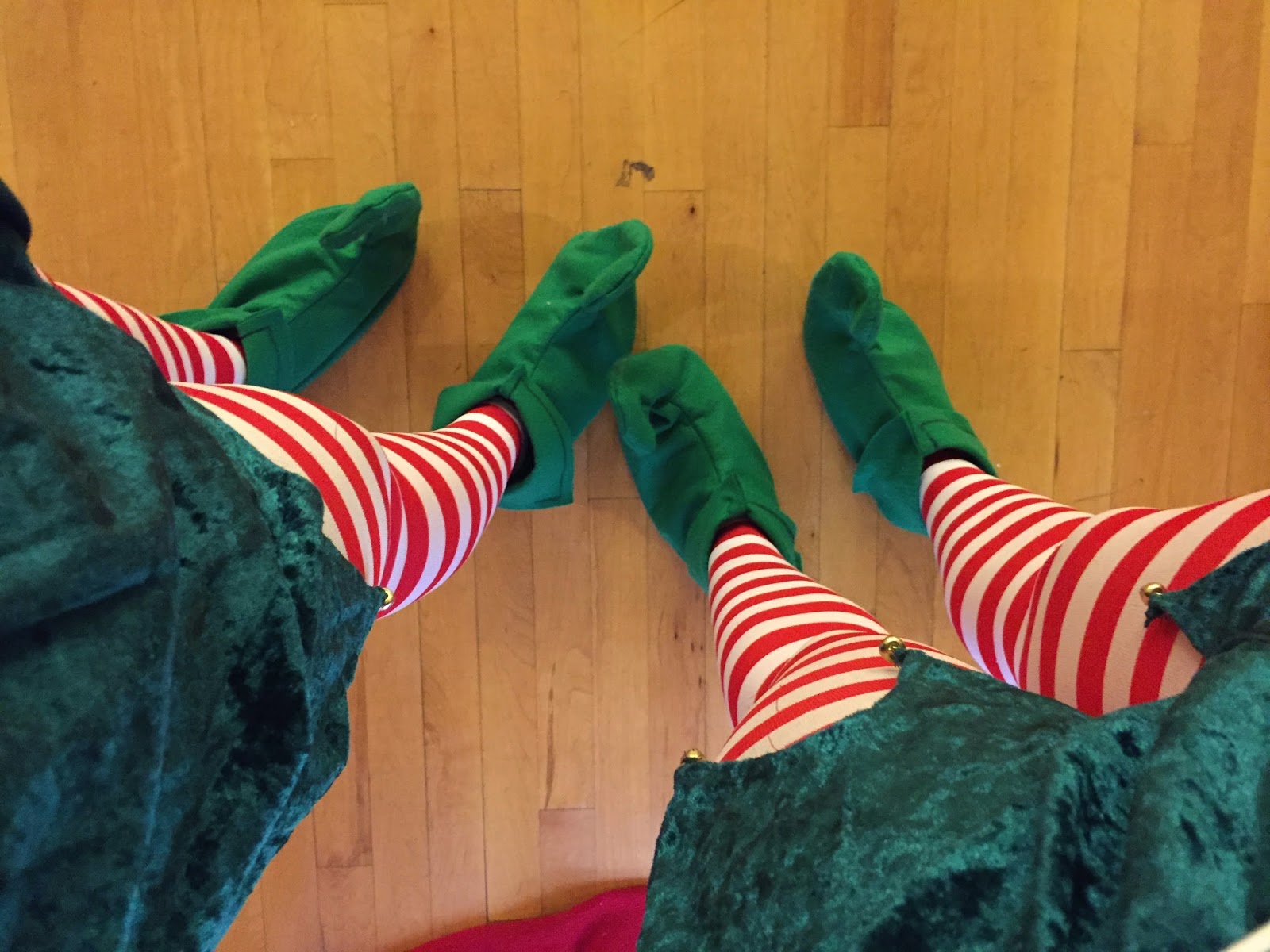 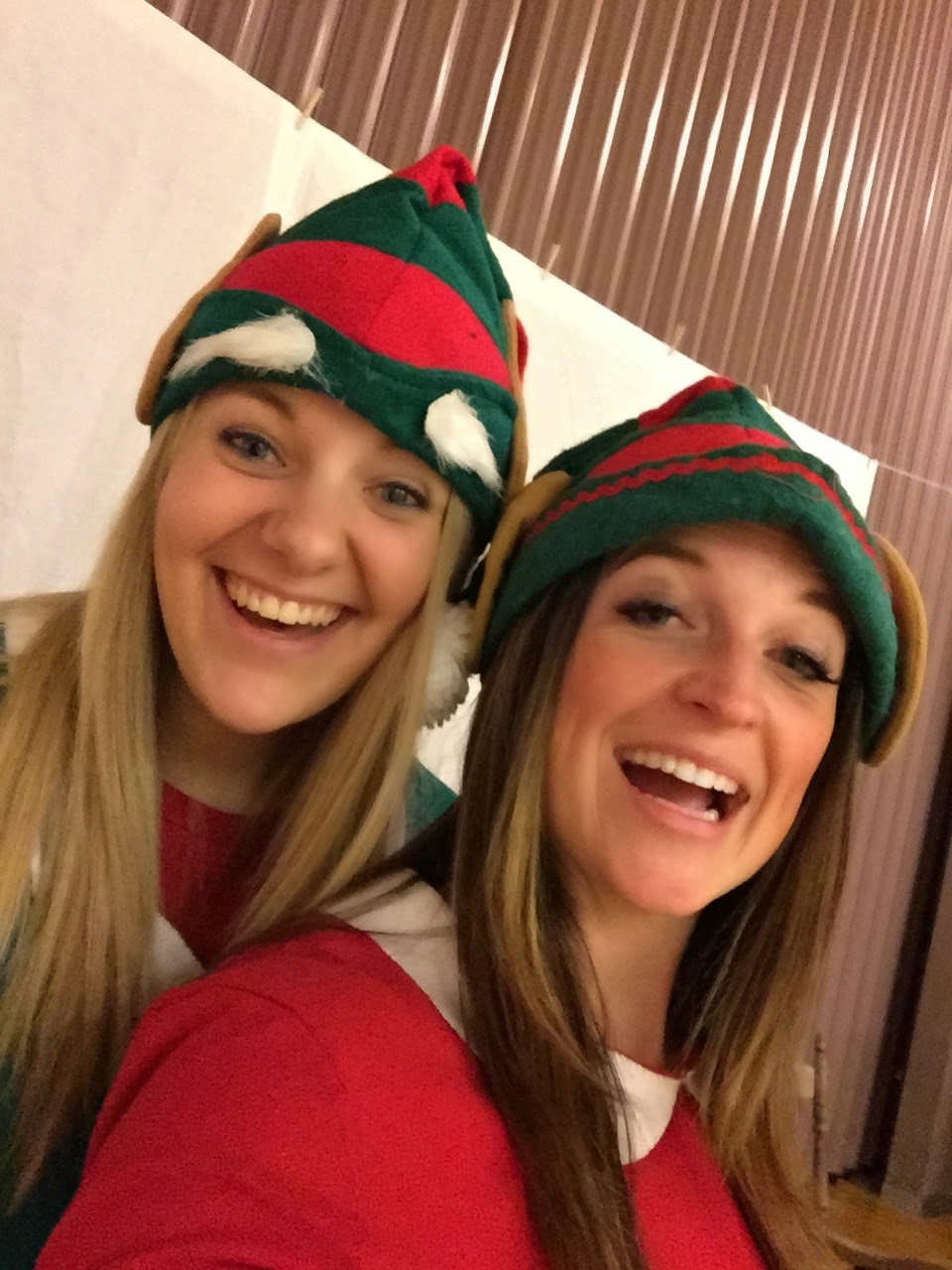 The Bishopric called the party a success, as do I. Not only did people come and have a good time, but we got a great turn out (about 90 people) some of which were less actives. Also the majority of the people came in their PJ's which is what I was hoping for. Ian had said the night before that if we didn't get at least 3 comments on how amazing the party was... he was going to leave the church (because we put so much work into it) of course he was joking, but we got well over 3 compliments on the party. The bishopric said it's was the best decorated party they had been to. One guy in the ward came in and said he was in awe at how awesome it was and thanked us for putting it together. My friend Nate came up to me later that night and told me he guessed that I was in charge. I said yes, how did you know. He said, this party has Tracy written all over it. There are so many cool details that nobody else would have done. Nate has been to my smaller house parties before. It was a great compliment and it makes all the hard work and little bit of stress all worth it. I'm so glad it went so well and was a success AND I'm glad it's now over and I can kick back and relax and enjoy the rest of the holiday season. 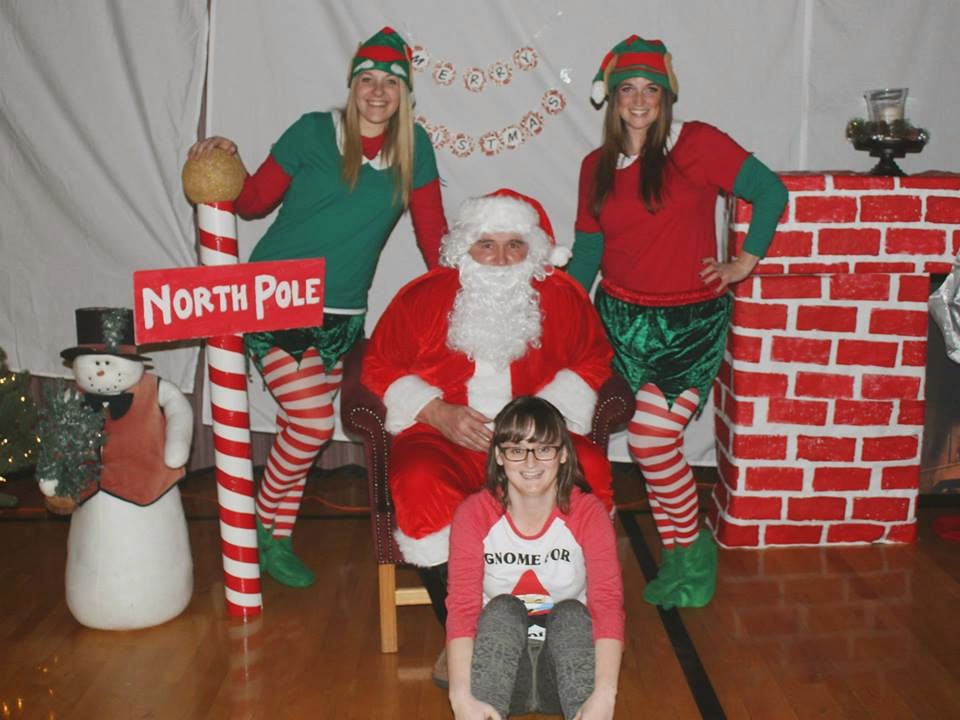 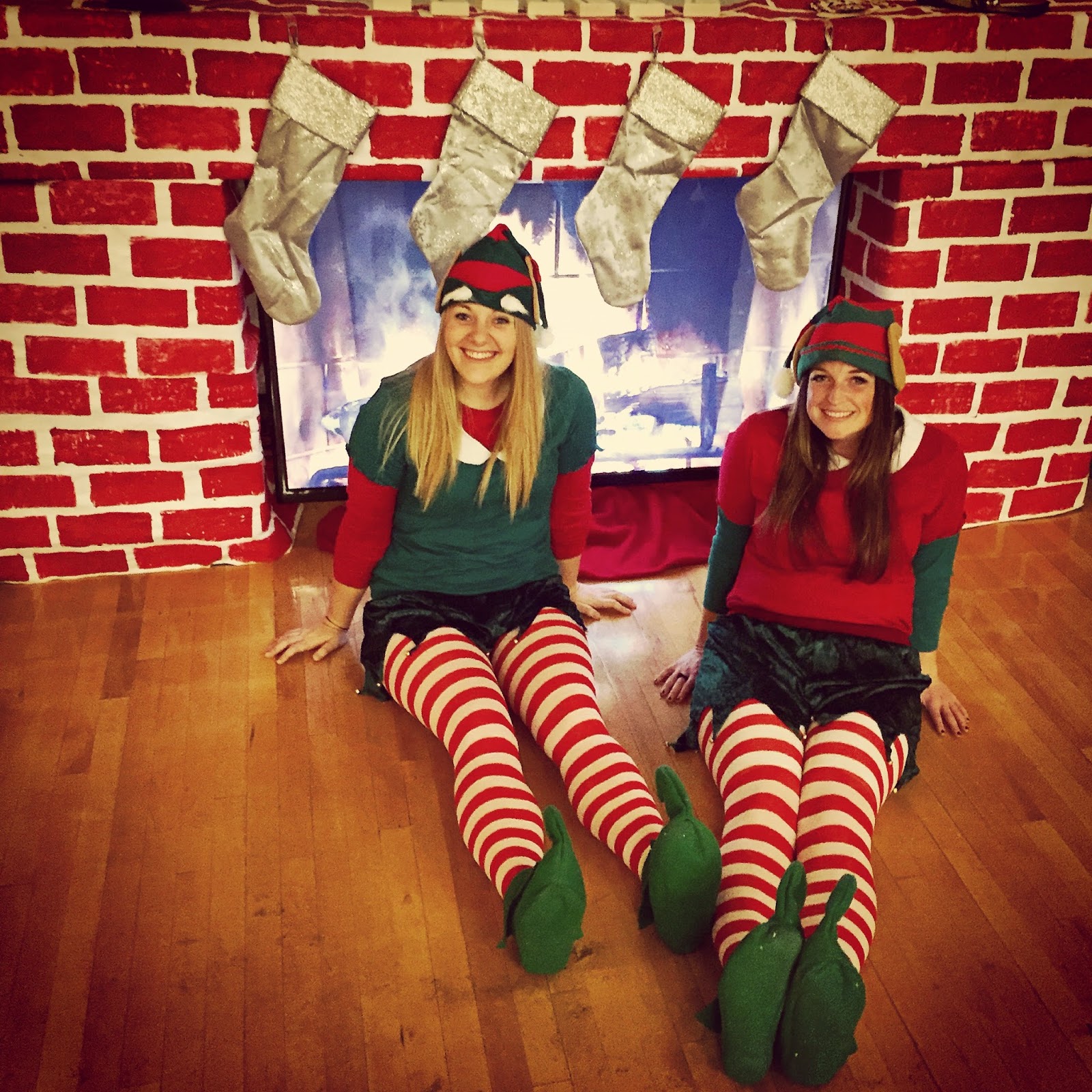 WOW TRACY!!! That party looks amazing :) Great job! They are SO LUCKY to have you :) You make a cute elf ;)

Looks awesome! I love the fireplace.

SERIOUSLY Tracy, you are amazing. Our ward did the Polar Express theme as well, and don't tell anyone, but yours is way better! I just got re-called (AGAIN, ugh!) to RS enrichment leader and I wish I was more like you so that my parties wouldn't stress me out to the max and then suck rocks when everyone got there.

PS We also got to dress in our pajamas, and Dan said it was the best. He said if he were in charge, every activity would be a pajama activity.

PSS Every time I saw an adult in normal clothes I thought to myself "SOMEBODY doesn't wear pajamas to bed... I wonder what they sleep in?" ;) 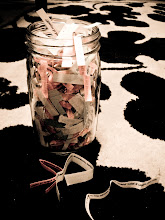 I belong to the church

of Jesus Christ of Latter-Day Saints

I changed my font at thecutestblogontheblock.com